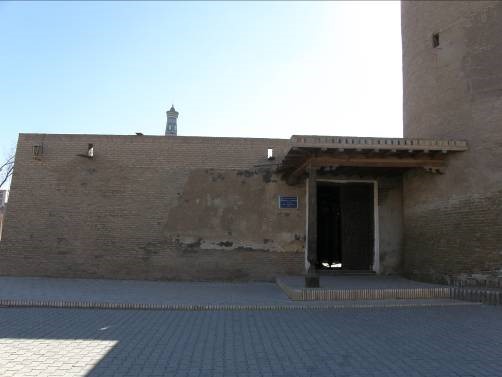 According to the Arab geographer Mukaddasiy, the Juma Mosque dates back to the 10th century. The mosque as it is now was built on money donated by Khan Abdurakhman Mekhtar's officials in the later 18th century. Historian Munis attests much to the same fact. The mosque is a unique structure without portals, domes, galleries and courtyard. The mosque can be accessed from on three sides. In the northern side opening on Palvan Qari Street features a 33 meters tall minaret. Inside there is a large hall with the ceiling resting on 213 wood columns. There are small openings in the ceiling for lighting and ventilation. The southern wall features a stalactite-filled niche and to its right there is a marble plaque detailing the mosque's earnings and lands. Of special interest are variously dated hand-carved doors and columns, dated back to 1316, 1517 1788 and 1789.